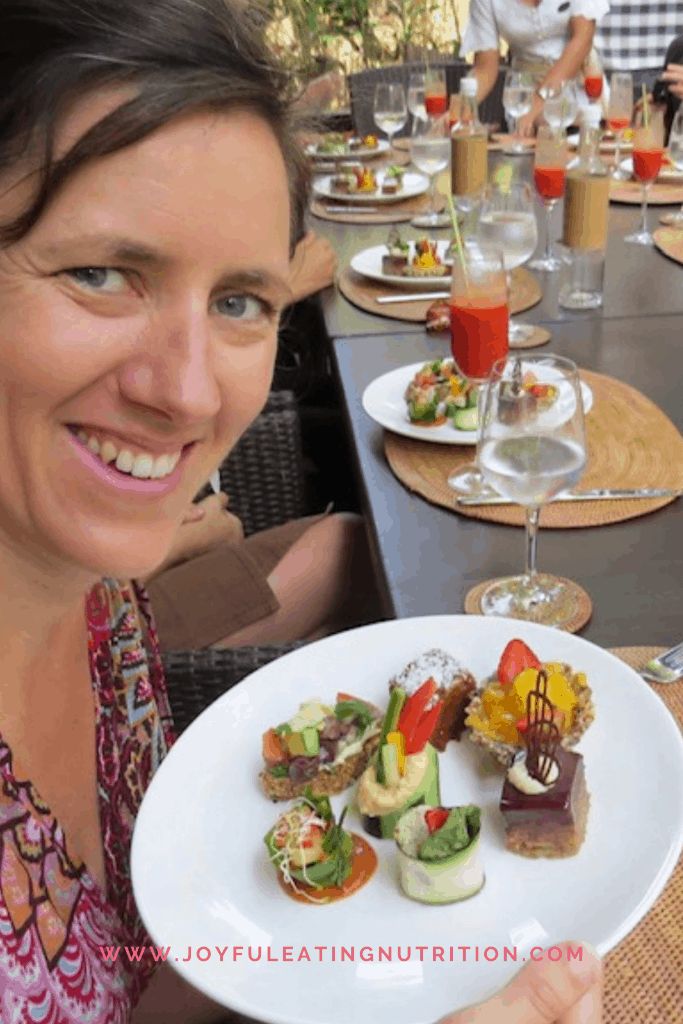 I almost can’t believe it myself—I ate and taught the raw food diet for nearly six years. I write this blog as an explanation and retraction of what I once taught.

It was in 2011 that I ‘discovered’ the raw food diet. At the time, I had no training in nutrition, just a thirst for knowledge that was satisfied by the collection of books I devoured.

I had always been interested in ‘healthy’ eating and a desire to find the ‘perfect’ diet for much of my life. I had years of failed diet attempts and feeling dissatisfied with my body. I had been exploring ‘traditional’ diets that suggested I needed to eat more protein, including foods such as organ meats. As a lifetime vegetarian, I couldn’t bring myself to eat offal and brains. I found eating meat hard enough as it wasn’t a taste or texture I was accustomed to, and I was unsure about choosing good cuts of meat or preparation. It was well and truly outside of my comfort zone.

An Introduction to the Raw Food Diet

So, when I came across the raw food diet, it felt like I had found a diet that could satisfy my hunger without a need to eat meat. It was not only that people’s transformations were captivating but that all the foods and recipes described were comprised of ingredients I felt entirely comfortable eating.

So many raw desserts are divine, and being given open reigns to eat them any time of the day felt liberating. I realise now that part of the appeal was that there didn’t seem to be a need to count calories or measure portions. The logic was that it was all ‘life-giving’ food and you could eat to your heart’s content, which I realise now was a message I had been craving.

I devoured book after book and experimented with recipes, many of which I enjoyed. There was one book that I found incredibly inspiring. The author talked about the benefits of increasing raw food in your diet but suggested that it was only when you ate one hundred per cent raw that you would truly discover the ‘power’ of this diet. So, I psyched myself up for it and in the following February, I declared I would eat nothing by raw food for one month.

My Commitment to Eating a Raw Food Diet

To be accountable, I decided to declare what I was doing to others. In February 2012, I announced on my personal Facebook account that I would be eating one hundred per cent raw food for an entire month. Not only did I declare it on Facebook, which I wasn’t much of a user of at the time, but I also printed photos and recipes of what I was eating and hung them in the wellness clinic that I managed.

Others became curious about what I was eating and how to prepare the foods. So, it was a natural progression that I begin teaching others—with my first workshop on the 31st of March. Yes, one month of anything makes you an expert!

I started teaching my passion with a raw chocolate workshop. Then I compiled notes and put together an ‘Introduction to Raw Foods’ workshop. I developed some easy, beginner recipes, as I didn’t believe we needed to dehydrate foods for days or labour over preparation to begin eating raw foods. I created a simple and more accessible approach to raw food than I found in many books. And people ate it up—figuratively and literally.

I enjoyed running these workshops. I kept running my ‘Introduction to Raw Foods’ for about four years. I ran variations of the workshop such as seasonal raw foods and different cuisines—is Indian or Moroccan raw food a contradiction? I didn’t think so at the time.

I even ran a raw food high tea in November 2012 (and a few more after moving from Adelaide to Brisbane). I enjoyed sharing how accessible and pleasurable I believed this way of eating was.

However, I did feel some angst in maintaining my health and looking the image of ‘health’. I found that on the raw food diet, my stomach was the flattest it had been in years. However, one soy latte or slice of pizza was enough to create ‘bloat’ and lose that look of ‘health’ I held in such high regard. I didn’t think my eating was disordered, but to fear the effects of eating falafels out with friends isn’t all that healthy. And a little bloat when eating foods you’ve restricted from your diet is completely normal (starved gut bacteria are having a party in there!).

I didn’t think my eating was disordered, but to fear the effects of eating falafels out with friends isn’t all that healthy.

I also had moments when I thought, ‘I’ve just read a book, which others could easily do.’ However, I acknowledged, which I find somewhat true to this day, that many people require others to lead the way—to do the research, try the recipes, compile it in a more palatable way, and pass on this wisdom and experience. That was what I was doing, right?

People continued to be interested in my raw food diet, and I kept teaching classes. However, in 2014 I thought it was time I took a deeper dive into raw food and enrolled in a two week ‘Certified Raw Food Chef’ course in Ubud, Bali. It was there that my thoughts of raw food changed.

Before Bali, I was self-taught, and I took an approach to raw food that was relaxed and explorative. In Ubud, raw food almost seemed like a religion with rules and ways to approach it. We made raw food quiche, which took days to construct. We learnt of the ‘life-force’ of raw foods and energetic healing of your spleen. Sorry, I can’t say much more because a switch flicked in my brain, and I switched off. It suddenly felt ridiculous, inaccessible and cult-like. I didn’t want to be part of this.

I spent quite a bit of that course journaling and reflecting on my food beliefs.

Years prior, I had trained as a coach in an approach of professional performance that focuses on being present in the moment. And while sitting on cushions under the thatched roof of the open ‘cooking’ space, I kept wondering whether we needed all these rules and prescriptions. I wondered if this way of eating was more stress-inducing than stress-relieving. I contemplated whether we are living in fear of dying, so much so that we forget to live. Isn’t part of living, enjoying food without fear? Shouldn’t we only be afraid of food that is mouldy or contaminated? Was my primary motivation weight loss rather than health? Can we live in more balance? Was I out of balance? Was my eating disordered?

Unlearning to Form a Healthy and Joyful Relationship with Food

I came back from that ‘training’ wanting to explore a stress-free, intuitive approach to eating. At the time, I had no idea that there was such a thing as intuitive eating (I didn’t ‘discover’ the book, Intuitive Eating, until years later). I just read the books I knew of: Eckhart Tolle’s book, The Power of Now and Geneen Roth’s, Women, Food and God.

I decided I wanted to explore our relationship to food and how we form disordered eating behaviours. I did a short course in eating psychology and wellness coaching. I began reading about the psychological aspects of eating. I switched the workshops I was teaching to address our relationship to food and debunk diet rules and the perception that we can eat to boost our metabolism. I questioned whether we could control our bodies and health by what we eat. I had more questions than answers. So I decided to go back to university to do postgraduate studies in nutrition and learn more about eating disorders. I got a job as a part-time support officer at an eating disorder counselling centre.

However, I made no declaration of my change in focus or apology for teaching a way of eating that was completely unnecessary and more likely to lead to harm—as it was just another diet that has the potential to lead to orthorexic tendencies.

I suppose I never said anything, as I wanted to explore my beliefs and approach before making a statement. And it is only now that I realise I have never really shared my journey from a raw food proponent to a non-diet, mindful and intuitive eating nutritionist.

I just quietly studied, researched, reflected and then wrote my book, Joyful Eating. However, I never debunked the raw food diet or retracted the information I espoused. I have thought about debunking the raw food diet and sharing that with you, many who have been with me since my raw food days. However, I’ve realised that I don’t want to delve into the science behind raw food diets. I’ll leave the debunking to my professor, Dr Tim Crowe, who does a good job in the podcast, Thinking Nutrition.

I want to continue focusing on our relationship with food and why we find ourselves going down these paths of militantly following a diet. I want to explore why we are so captivated by others eating or believe influencers on Instagram or Facebook more so than those who have studied nutrition at university? Why do we think we’re being lied to by scientists? Why do we believe that there is some magical cure or perfect way to eat that we just don’t know about yet, or that some establishment is hiding from us?

A Joyful Relationship with Food

I now have a joyful relationship with food. I have reached this place because I have come to believe that there is no perfect diet or conspiracy. I have come to realise that there are many ways we can nourish our bodies, and nobody has the answers.

I still enjoy some raw food recipes occasionally, but I have a relaxed, intuitive and joyful relationship with all food. I follow no diet—and eat in a way that supports me to feel energetic and alive.

I believe we can learn to listen to and trust our bodies, and ourselves, to nourish and care for ourselves without the need for weight loss or diet rules—this is the foundation of my book, Joyful Eating, which is something of a gift to you so that you don’t go down the path I did.

My philosophy of Joyful Eating

Joyful Eating: How to Break Free of Diets and Make Peace with Your Body